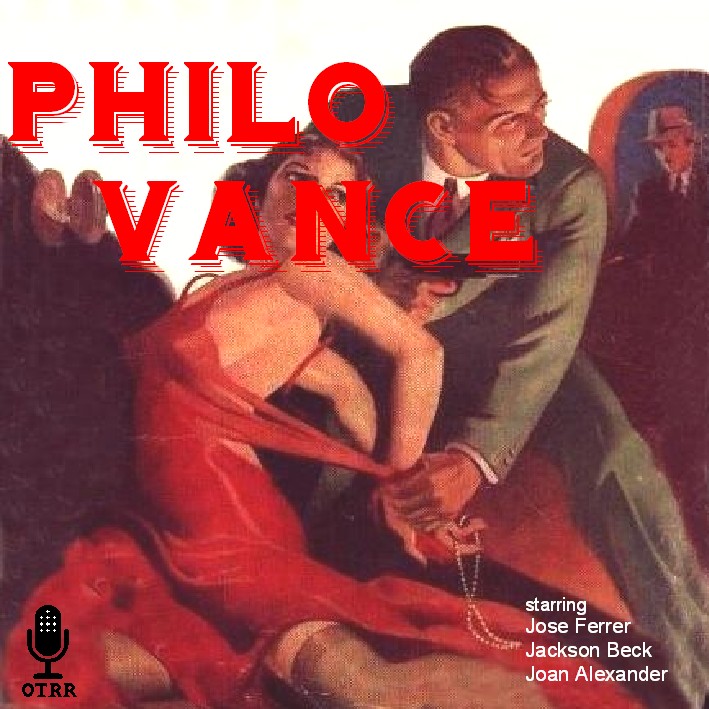 Philo Vance was the detective creation of S. S. Van Dine first published in the mid 1920s. Vance, in the original books, is an intellectual so highly refined he seems he might be ghostwritten by P. G. Wodehouse. Take this quote from The Benson Murder Case, 1924, as Vance pontificates in his inimitable way: "That's your fundamental error, don't y' know. Every crime is witnessed by outsiders, just as is every work of art. The fact that no one sees the criminal, or the artist, actu'lly at work, is wholly incons'quential." Thankfully, the radio series uses only the name, and makes Philo a pretty normal, though very intelligent and extremely courteous gumshoe. Jose Ferrer played him in 1945. From 1948-1950, the fine radio actor Jackson Beck makes Vance as good as he gets. George Petrie plays Vance's constantly impressed public servant, District Attorney Markham. Joan Alexander is Ellen Deering, Vance's secretary and right-hand woman. The organist for the show is really working those ivories, and fans of old time radio organ will especially enjoy this series. Perhaps one reason the organist "pulls out all the stops" is because there seems to be little, if any, sound effects on the show. Philo Vance, the radio series, does pay homage to the original books in that both were, even in their own time, a bit out of date and stilted. OTRR Certification Information: Series Name: Philo Vance Certification Status: OTRR Certified Accurate Certification Date: April 10, 2007 Certification Version: Version 2 Number of CDs: 2

Reviewer: jonfrum - - February 4, 2017
Subject: Comment on bottom review.
The guy who wrote the review at the bottom of this page obviously put some effort into it, so good for him. But if you read it to the end, you (or rather, I) come to a classic problem of internet commentary. The writer dismisses this series - which is nothing special - and then lists shows that he thinks were better. OK, so I bite. I download the Inspector Thorne series, and give the first episode a listen. What a stinker! I couldn't stick with it for ten minutes. The Inspector arrives at the scene of the crime, and then immediately starts his interrogation - in a series of angry shouts. He's like that cartoon cop who assumes that everyone is guilty, and has to be corrected by the thoughtful private or amateur detective. Absolutely terrible. This series is much better than that - at least in the first five episodes that I've listened to.
Reviewer: Alonzo Church - favoritefavoritefavorite - June 21, 2013
Subject: SS Van Dine Would Have Disapproved
SS Van Dine's Philo Vance is an arrogant so and so who is brilliant in a mostly useless and pedantic way, and succeeds in annoying just about everyone (including the reader) en route to solving rather easy to figure out mysteries. (Just find the guy who "can't" do the murder, and that's whodunit.)

On disc two (the only one I listened to), we find a different fellow, who is a private eye who never seems to have a paying client, but is always ready to solve a case for his alarmingly sycophantic buddy, DA Markham. These episodes have a certain charm, as some of the episodes, featuring alarmingly wholesome criminals and their chipper girlfriends almost feel like a prototype for an episode of Twin Peaks. But mostly, you have the usual parade of gangsters and scheming dolls trying to match wits against the mighty Philo Vance, and failing. It's all OK. But nothing outstanding ever happens in this group.
Reviewer: revbrand - favoritefavoritefavoritefavoritefavorite - July 9, 2010
Subject: I loved these!
These are great tales that are fun and interesting. The relationship between Vance and the DA is fun. The elevator man is funnier than heck. I'd say these were outstanding if you can get past the ugly theme music
Reviewer: adamelijah - favoritefavorite - May 14, 2010
Subject: Philo Vance: Needs a kick in the pants
Quote Odgen Nash. I'm a fan of most radio detectives, but not most of Philo Vance.

There are three episodes in this collection from the mid-1940s Philo Vance radio show, well worth listening to. Though Vance is a tad arrogant, the mysteries are worthy. Those episodes explain why this is a 2 Star Review.

By the late 40s when Philo Vance came out through Ziv Syndication, they decided a less arrogant Vance would be in order, and that's what you get with Jackson Beck, who plays the part as wooden. There was no chemistry between the characters. The plots were also very simple.

To me, this is a death for being able to enjoy a show. Many shows can overcome their weaknesses to still enjoyable because of their strengths. Many of the Rathbone-Bruce Sherlock Holmes radio episodes had mysteries that weren't all that compelling, but the show was fun because of the chemistry between Rathbone and Bruce. Rocky Fortune had problems, but it was Frank Sinatra as a Private Detective. And the chemistry was off in the Stanley Sherlock Holmes episodes, but the mysteries were pretty good.

This is a show where there's just nothing there. Philo Vance lacks chemistry, a solid lead, and its mysteries are so simple that its an insult to the police force to suggest they would need Vance's "help."

If you're looking for a good soft boiled detective, try Hercule Poirot or Nero Wolfe. Even Leonidas Witherall or Inspector Thorne will do better than Mr. Vance.